A tight economy and rising costs at the pump have spurred increased interest in fuel-efficient, single-cylinder streetbikes. Much is also owed the supermoto movement for lending a cool factor and styling flair to the modern one-lunger. These days, riding a Single doesn’t mean settling for pedestrian performance or bland aesthetics.

A prime example of this is the 2013 KTM 690 Duke. The Duke’s strikingly aggressive looks are complemented by the most powerful LC4 four-stroke Single the Austrian manufacturer has ever unleashed.

Low and compact, the bike feels smaller than its predecessor, thanks to a slightly shorter 57.4-inch wheelbase and a dished saddle that’s only 32.7 in. off the pavement. With a dry weight of 337 pounds, the KTM 690 Duke is super agile on twisting tarmac and remarkably easy to maneuver in the garage.

A twist of the lightly sprung throttle delivers impressive acceleration that raises the bar for a Single. On the Cycle World dyno, the 690 pounded out 63.9 peak horsepower at 7630 rpm and a broad spread of torque ramping up to 48.9 foot-pounds at 5420 rpm. In addition to being fitted with a vibration-damping counterbalancer, this latest LC4 has an “anti-hopping” slipper clutch and ride-by-wire fuel injection.

FUEL-MISER: Despite its impressive level of performance, the midsize Duke managed an average of 57 mpg, yielding a range of 200-plus miles from the 3.7-gallon tank.

The Duke’s overall gearing is well-suited to everyday riding. A tall top cog, relative smoothness and excellent fueling make the KTM one of the most pleasant Singles we’ve ever ridden on the freeway. Dialing up 5000 rpm on the analog tachometer in sixth gear registers an indicated 75 mph on the digital speedometer.

The chassis provides light handling while maintaining a solid degree of stability. The WP suspension strikes a good balance between performance and comfort with abundant cornering clearance. Now that anti-lock is standard, the Duke is safer, and ABS can be toggled off for unadulterated play. 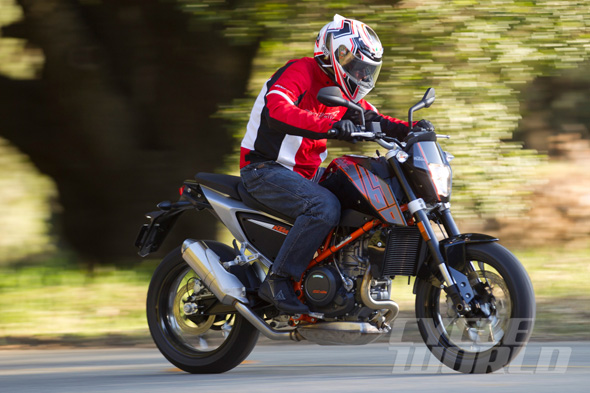