With a strong liaison to the way the bikes used to look in the 40s, the 2014 Harley-Davidson Softail Slim FLS retains the classic slender lines of the old-school machines, but manages to subtly blend in modern features and tech.

If massive looks are your game, then the 2014 FLS is not going to appeal to you. However, in case youre after smooth, flowing yet muscular lines, then weve most likely got a winner here. The hidden rear shock maintains the hardtail looks while offering the contemporary comfort. At the other end of the bike, the Hollywood-type bars and the sleek “Cat Eye” tank-mounted console hark back in time. The massive headlight array of the Heritage Softwail was ditched in favor of a single, large unit in a black housing.The black Twin Cam 103 engine boldly displays chrome accents to match the rest of the build, but given the extensive palette of custom paints schemes, parts and accessories, the 2014 Softail Slim can take multiple shapes. A solo seat was preferred in place of the two-up one other Softails come with, while the windshield of the Heritage is no longer present, either. With ABS brakes as standard and H-D RFID smart security, this minimalist bobber carries on the styling heritage of the bikes of yore, yet appeals to younger riders as well, thanks to its uncompromising attire. 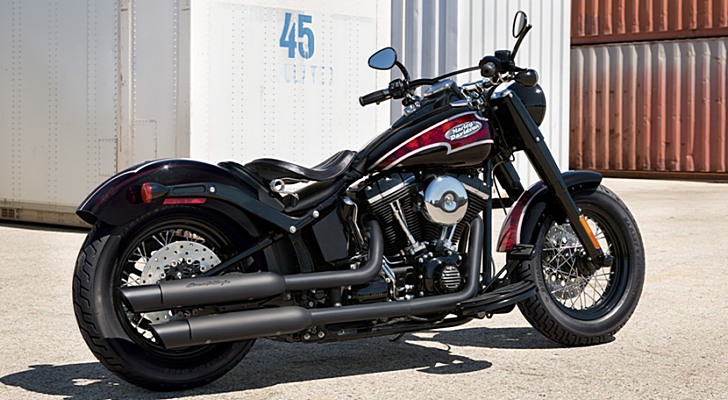