Line up the 2013 Suzuki V-Strom 650, Kawasaki Versys, and the Honda NC700X, rev ‘em up, drop the clutch, and the V-Strom gets the drop on the other two. The Strom’s V-Twin gives it the advantage in the low-end, throttle response is immediate, and the Suzuki demonstrates that of the three, it displays the most sportbike-like performance. A peek at its dyno chart reveals how evenly its power is delivered, from the instant hit on the low-end to the pull on top. While the Strom surprisingly had the lowest numbers on the torque chart at 41.94 lb-ft @ 6700 rpm, all three motorcycles put up numbers within a couple lb-ft of one another. Where it separates itself from the NC700X is top-end biased horsepower, because while the Honda’s hitting its rev limiter and topping out, the V-Strom is still pulling strong. The Suzuki put up an almost identical horsepower number as the Versys at 63.73 hp @ 8900 rpm, which translates to plenty of pull late in the rev range, too. The edge the V-Strom exhibits in the lower ranges thanks to its V-Twin configuration, teamed with the smoothness of its power delivery, gives it a slight advantage on the potent powerplant of its rival the Versys.

“What stands out is how ridiculously smooth it is. That smoothness sort of masks its power, and the V-Strom can haul the mail out on the interstate. If you want to get your license revoked and tossed into the clink, Suzuki makes the Hayabusa… For real-world sane riders, the V-Strom 650 delivers plenty of power for the street,” said Managing Editor Bart Madson.

The 2013 Suzuki V-Strom 650 benefits from last year’s revisions to the powerplant that was originally made for the SV650. In 2012 it received new pistons, fuel injectors and camshafts aimed at improving mid-range power. It also got a new crank and fresh ECU engine mapping aimed at improving gas flow. The ECU in question is a 32-bit onboard

The 2013 Suzuki V-Strom 650 ABS stands tall in the saddle and spritely in the engine department thanks to a capable 645cc DOHC 90-degree V-Twin. 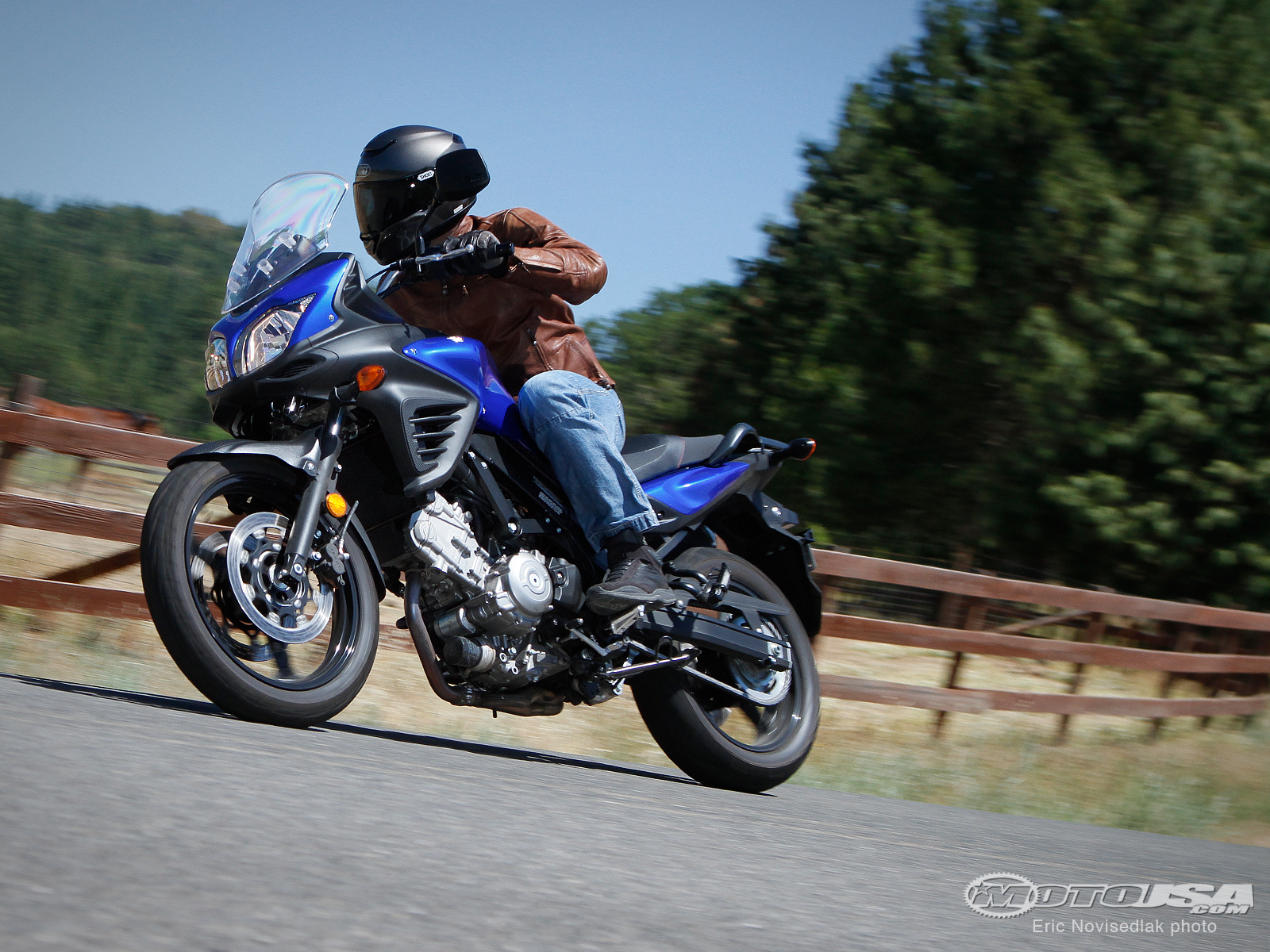 A peek at the dyno chart reveals how evenly matched the Suzuki V-Strom and Kawasaki Versys really are. While the Versys has the Strom covered in midrange and top-end, the torquey delivery of Suzuki’s V-Twin gives the V-Strom the edge off the line.

The 2013 Suzuki V-Strom is stable and handles intuitively when the roads begin to twist up. computer controlling Suzuki’s proprietary Dual Throttle Valve system that keeps the flow of fuel feeding the 645cc V-Twin constant regardless of throttle position. We already mentioned it also received a new oil cooler last year, its low-to-mid rpm range torque beneficiaries of the addition. While the engine has plenty of zip, it functions efficiently too with the second-best average of 50.578 mpg, down quite a bit to the highly efficient NC700X but five mpg better than the Versys.