On paper, the new KTM 1190 is impressive. On the road, it’s more than impressive. It’s amazing. Unfortunately, you’ll have to wait a little bit – at least until December – before you can get your hands on one to see for yourself, but we’ll tell you right now it’ll be worth the wait. How do we know? Because KTM teased us by giving us a sneak “preview” of the 2014 1190 Adventure, which the Austrians call the world’s most versatile travel enduro bike. And the new 1190 Adventure just might be. But what we do know for sure is that our short, half-day ride on the bike left us wanting more. A lot more. 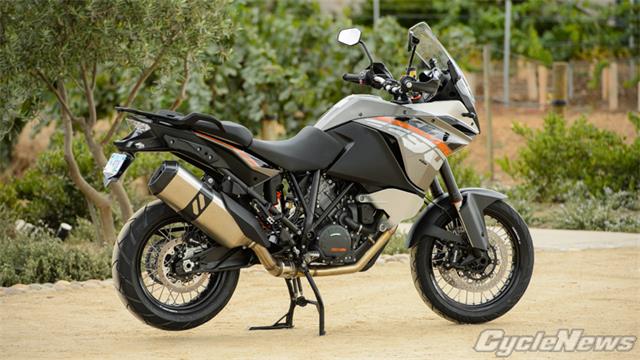 This is the 2013 Euro version that we rode, but KTM says the 2014 US version will be nearly identical and fully loaded.

The 1190 replaces the previous 990 Adventure in a big way. It gets a new motor, a new chassis, new 17-inch (front and rear) tubeless tires and spoked wheels, and a ton of other goodies like electronic damping suspension (EDS), KTM’s Motorcycle Traction Control (MTC), C-ABS braking, a slipper clutch, electronic ride-by-wire engine management system and an adjustable windscreen. It also has a tire-pressure monitoring system, adjustable seat (height), and LED running lights. The headlight’s low beam also automatically comes on when it senses a drop in ambient lighting like when riding through a tunnel. The 1190 Adventure, KTM’s answer to BMW’s new water-cooled R1200GS, is the most technically advanced motorcycle the company has ever produced.

The bike we got to sample was a 2013 European model that is already available across the pond, but will be identical to the 2014 U.S. version that will be here by the end of the year. The same LC8 motor that powers KTM’s 1190 RC8 R superbike is used in the 1190 and is nestled in the Adventure’s steel trellis frame.