BREA, Calif. – The Suzuki GSX-R1000 has always been an accessible sportbike; whether your desire is to win superbike races or to carve up your favorite road, the GSX-R1000 has been ready for all enthusiasts who desire its class-leading performance. In honor of its 50th Anniversary in America, Suzuki introduces the exclusive, limited-production Suzuki GSX-R1000 SE – with a total of just 50 numbered motorcycles to be sold through Suzuki dealers in America.

During its 50th Anniversary Celebration, held at the Suzuki Fan Paddock during the Indy MotoGP weekend, Suzuki Motor of America, Inc. (SMAI) announces the limited-production GSX-R1000 SE, a sportbike with many custom-designed features found on no other GSX-R sportbikes. A total worldwide production of 100 models means the 2014 GSX-R1000 SE is a highly exclusive motorcycle.

Built around the Suzuki GSX-R1000 that has won more AMA Superbike Championships than any other motorcycle in the class, this SE model adds singular style that is most evident in the polished and chrome-plated frame, plus the machined and polished chrome rims with clear-coated blue spokes.

From its front air intake to the muffler end cap, this GSX-R SE serves up special appeal. Matching the blue wheel spokes and ram-air intake ports, the SE’s fork tubes and other specially selected components are anodized blue. That exclusive component finish is added to the fork adjusters, the steering stem nut, and the ring surrounding the tachometer.

At the rear of this custom superbike, Suzuki added a polished exhaust and muffler combination that’s finished with a black anodized endcap. Helping drive this motorcycle’s power is a blue-colored chain. And in between, the clutch cover, generator cover, and rear shock spring are given a blue finish.

More unique features distinguish the GSX-R1000 SE from all other motorcycles, including the individually numbered serial plate secured to the bike’s triple clamp, denoting each as one of only 100 built in the world. Still, beneath this superbike’s rich white body work and sole graphics treatment is the ultra-accessible and high-performance Suzuki GSX-R1000.

Pricing and availability will be announced soon. 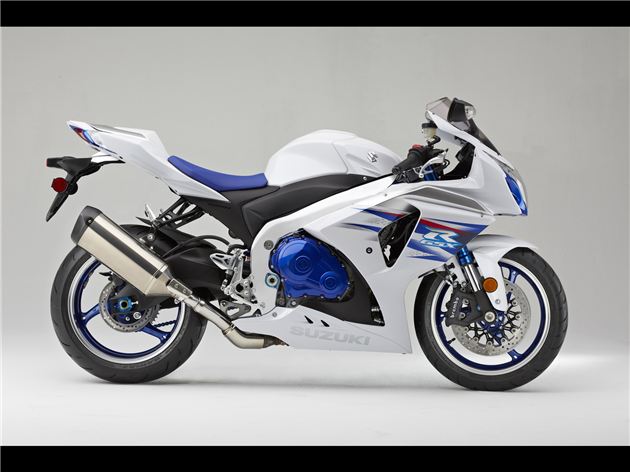