We took every dimension of a great motorcycle and made it better,” says Harley-Davidson’s President and Chief Operating Officer, Matt Levatich. He’s talking about the new Street Glide Special and its FL-category cousins, all key players in Project Rushmore, a massive program that he describes as the “most significant product launch in the entire 110 years of the company’s history.”

Project Rushmore is, ahem, a mountain of enhancements made to eight 2014 models: Road King, Street Glide, Street Glide Special, Electra Glide Ultra Classic, Ultra Limited, Tri Glide Ultra and the CVO Ultra Limited and CVO Road King. Collectively, these bikes have received more than 100 renovations, many of them major, including new High Output versions of the Twin Cam 103 engine (some liquid-cooled, some not); a sophisticated, linked ABS system; upgraded suspension; a state-of-the-art infotainment system and a complete makeover of fairing, fenders and luggage systems.

Yet the bikes are still utterly recognizable. And herein lay the brilliance, and the challenge, for America’s most beloved brand. No one hates it when a new Harley looks and sounds like a Harley “should.” No one says, “Oh, I wish those new Harleys looked a little more contemporary.” Yet modern technology rushes headlong, and its advantages are not to be overlooked.

Project Rushmore exemplifies Harley’s long-standing commitment to honoring its core customers by knowing what’s important to them. But it’s also about knowing what’s good for them. At its root, this program is about quietly infusing useful features and sophisticated technology into motorcycles that loudly celebrate tradition and the beloved heritage of Harley-Davidson.

Because the Street Glide is The Motor Company’s perennial best-seller, and the new “Special” edition is the world’s favorite bagger with a couple bonus features, we wanted it to be the first Project Rushmore bike examined under the microscope. My first days were spent riding the Street Glide Special in the Colorado Rockies, where the model-year 2014 bikes were introduced.

Naturally, we wanted to investigate the promise of additional oomph supplied by the new High Output Twin Cam engine, which isn’t liquid-cooled in the Street Glides. While liquid cooling allows higher compression and more sustained performance for heavier bikes such as the Ultra Limited, all the 103s benefit from a new camshaft and a high-flow airbox that are most responsible for the added power. When I blasted onto the freeway, the Street Glide’s 103 felt its usual grunty self, charging heartily through quick shifts and comfortably settling into higher-than-average middle-of-the-country Interstate speeds. 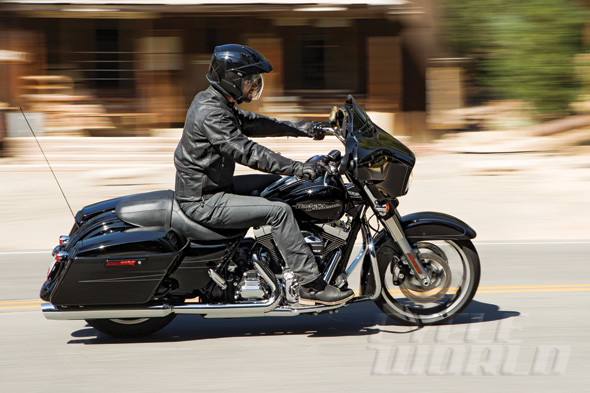